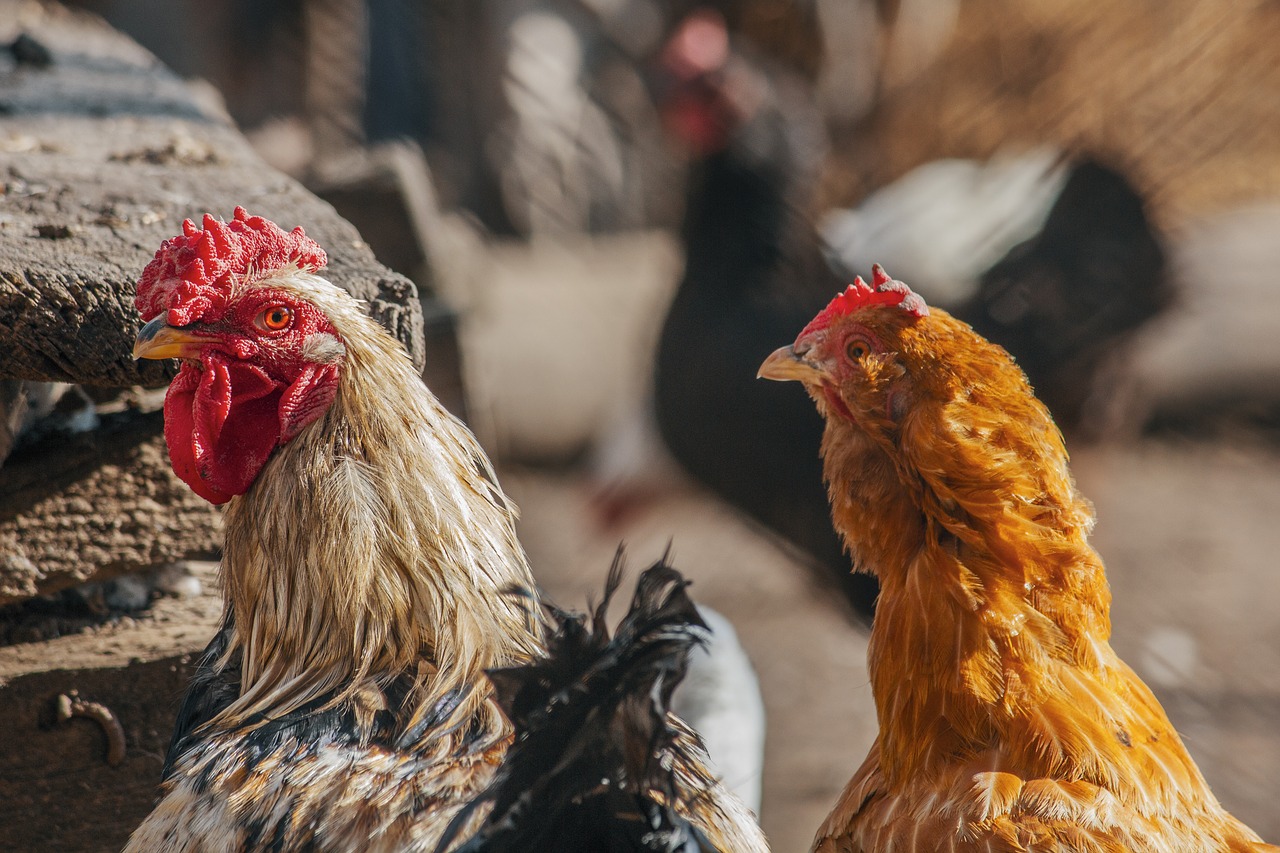 If you’re feeling the sweat build as the mercury rises, don’t feel alone – you aren’t the only one.

Summer can be tough on all of us, but nowhere is that truer than in the chicken coop.

Chickens are unique creatures in that they can survive in about 99% of all environments – however, there are some chicken breeds that are better suited to warmer temperatures than others.

While just about any chicken breed will be able to hack it during the few weeks of extreme heat in the summer, there are some that can thrive in climates that are warm year-round, too.

If you’re looking for more information about the most heat hardy chicken breeds, look no further – these are the 12 breeds that are best-suited to tropical weather, as well as the best tips for keeping your flock cool in scorching temperatures.

How Do Chickens Stay Cool – and What Makes for a Heat Hardy Chicken?

Chickens don’t sweat as we do in order to beat the heat, but they do have their own unique cooling mechanisms.

Chickens have wattles and combs that have a high concentration of capillaries.

These capillaries circulate body heat and blood near the surface of the skin, allowing heat to dissipate rapidly from these surfaces.

That’s why, as a general rule of thumb, chickens with large combs and wattles are best suited to warm environments – and why those with small combs and wattles do better in the wintertime (the potential risks and dangers of frostbite aside, of course). Smaller birds will also be more adept at staying cooler.

Chickens stay cool with these methods, but they also will pull their wings away from their bodies to get airflow to the areas beneath their wings. They also pant.

As a general rule of thumb, chickens are much better at tolerating the cold than the heat.

It’s rare to find a chicken breed that can’t hack it in the cold – and it’s much more difficult to keep a chicken cool than it is to warm it up.

A chicken naturally prefers temperatures between 55 and 75 degrees. Anything higher can stress your chickens’ bodies – this is especially true if the humidity rises above 75%.

A sudden spike in temperatures is also going to be more dangerous than a gradual increase.

Here are the general tips to follow when you are selecting a chicken breed that will be living in extreme heat:

Consider your environment and its weather patterns carefully before you decide which chicken breeds to raise.

In many cases, you can invest your time and money in a flock that will be hardy throughout all of the seasons – although if you live in an area that experiences extreme heat throughout much of the year, you might want to consider one of these 12 heat-hardy chicken breeds.

Orpingtons are tolerant of cold temperatures, too, and although they are large, they are skilled at adapting to any setting.

Orpingtons come in many variations recognized by the American Poultry Association and they’ll lay an impressive 190 pale brown eggs each year.

They can also be raised for meat.

The Easter Egger chicken is one of the most popular backyard breeds because it lays multicolored eggs, with options including blue, green, and pink – you’ll never know what you are going to get!

However, these chickens are popular for another reason, too – they do really well in the heat.

Sweet, gentle birds, Easter Eggers lay up to 280 eggs per year and you won’t have to worry about production stalling in the summer heat.

These heat-tolerant chickens lay quite a large amount of large brown eggs and can tolerate both heat and cold.

They are large and docile, loving attention – this also makes them great candidates as backyard chicken pets.

The Rhode Island Red was adapted to the northeastern portions of the United States – so it knows how to handle extreme swings in the weather.

It can tolerate both cold and hot temperatures and is the ideal backyard chicken breed.

A gorgeous rust-colored chicken, the Rhode Island Red is also one of the best egg-laying chicken breeds, producing up to 300 eggs per year.

That being said, this dual-purpose bird is also a great meat producer.

A superb breed for beginners, the Rhode Island Red is a productive chicken breed for you to consider.

Welsummer  – this breed has “summer” in the name, so it’s no surprise that it performs extraordinarily well in the heat.

This chicken breed is a pale golden-brown shade and is frequently raised as a dual-purpose bird.

It produces unique chocolate-colored eggs (usually about 160 each year) and is a friendly, intelligent breed that does well when allowed to free-range.

The White Leghorn is one of the most common chicken breeds raised by commercial egg farmers because it is not only a productive egg layer, but it’s also quite hardy in extreme conditions.

This chicken can also be raised for meat, although you won’t get as much meat out of it as other dual-purpose breeds.

However, White Leghorns start laying eggs at a young age and don’t usually shut off when the temperatures rise.

They are active, intelligent chickens that do quite well when allowed to forage for their own food.

Each hen will produce about three eggs per week for you, but this breed can also be raised for meat.

It is known for having a delicate, sweet disposition and it does well when allowed to free-range as well as when it is raised in confinement.

These chickens are originally from India and are large and heavy – weighing more than eight pounds on average.

Brahmas do well in the heat for the most part, but if you’re concerned that this chicken’s size might impede its heat tolerance, you might want to consider raising a bantam Brahma instead.

Andalusian chickens also do quite well in the heat, having been raised in Spain.

These chickens are rare, having been saved from the brink of extinction.

However, if you can find one, you need to snatch one up if you live in a warm environment.

These chickens are noisy, active birds that can be raised in confinement or allowed to free-range. They also lay a ton of large white eggs.

The Fayoumi is a chicken breed that is native to Egypt – is it any wonder that it performs exceptionally well in the heat?

This chicken is a great forager and thrives in warm climates.

It has an upright appearance and will produce a maximum of two eggs each week. As a result, it’s best kept as an exhibition bird instead of a production chicken.

It can occasionally get flighty, so it’s not the best if you don’t have a tall fence to keep it contained.

The New Hampshire Red is a gorgeous breed of chicken that is derived mostly from the Rhode Island Red along with a combination of other breeds.

As a result, it has inherited the Rhode Island’s tolerances for a wide array of temperatures and is one of the most heat-hardy chicken breeds you will find.

A self-sufficient chicken, it can be raised in confinement as well as allowed to free-range.

It is a dual-purpose chicken that can be raised for eggs (about three per week) as well as meat.

Sumatra chickens are native to the tropics, so they do quite well in the heat.

These gorgeous chickens have glossy, green-black feathers that shimmer iridescently in the sunlight.

They are notoriously difficult to tame and also quite rare, and if you do invest in one, know that you probably won’t be raising it for meat or egg production. Sumatras are usually kept for exhibition or ornamental purposes only.

The Minorca chicken is one of the most active breeds of chicken – can you keep up? If you can, you’ve got yourself a super heat tolerant chicken breed.

This chicken is native to the Mediterranean region, so it has evolved to be able to tolerate the region’s high temperatures with ease.

These chickens have tight-fitting feathers and will lay quite a few extra-large white eggs for you.

Often raised as exhibition birds, Minorca chickens are prized for their friendliness – although it should be noted that they can occasionally become flighty.

Tips for Helping Your Chicken Beat the Heat

You can’t change the weather – but you can change up the techniques you use to help your chickens stay cool in the summer sun. Here are some tips to help cool down your flock.

Be Aware of the Signs of Heat Exhaustion

Know the signs of heat exhaustion long before the summer months arrive. This will prepare you to address it immediately if it arises in your flock. You might detect signs like excessive panting, pale comb and wattles, or general lethargy.

Here are some other signs of heat exhaustion:

If you have a chicken suffering from heat exhaustion (or just generalized dehydration), get her to a cool area immediately.

Dunk her legs and feet in a tub of cool water to lower her body temperature and give her plenty of cool water.

You might also want to supply some electrolytes to replenish what she has lost.

Some meat breeds, like Cornish Cross birds, simply can’t hack some extreme summer temperatures because they are so large – their bodies simply can’t cool themselves quickly enough.

You might want to invest in dual-purpose birds that are smaller or devise systems to help these birds stay cool.

Not sure you have the resources to help your backyard flock make it through the intense heat?

Consider raising meat birds during the cooler parts of your year, like during the winter, so you don’t have to worry about them overheating.

Since many meat breeds are designed to be raised for only a short duration of time, you won’t have to worry about keeping them cooled down all year.

If you’re tempted to try and see if your chickens can make it through the summer heat unassisted, don’t risk it.

Not only can a chicken that becomes heat-stressed stop producing eggs and slow in its overall growth, but it can also become extremely ill – and even die.

Choosing a breed that is equipped to handle the intense heat can prevent these issues, but regardless of the chicken breed you choose, you need to provide the proper care to help your chickens tolerate the heat, too.