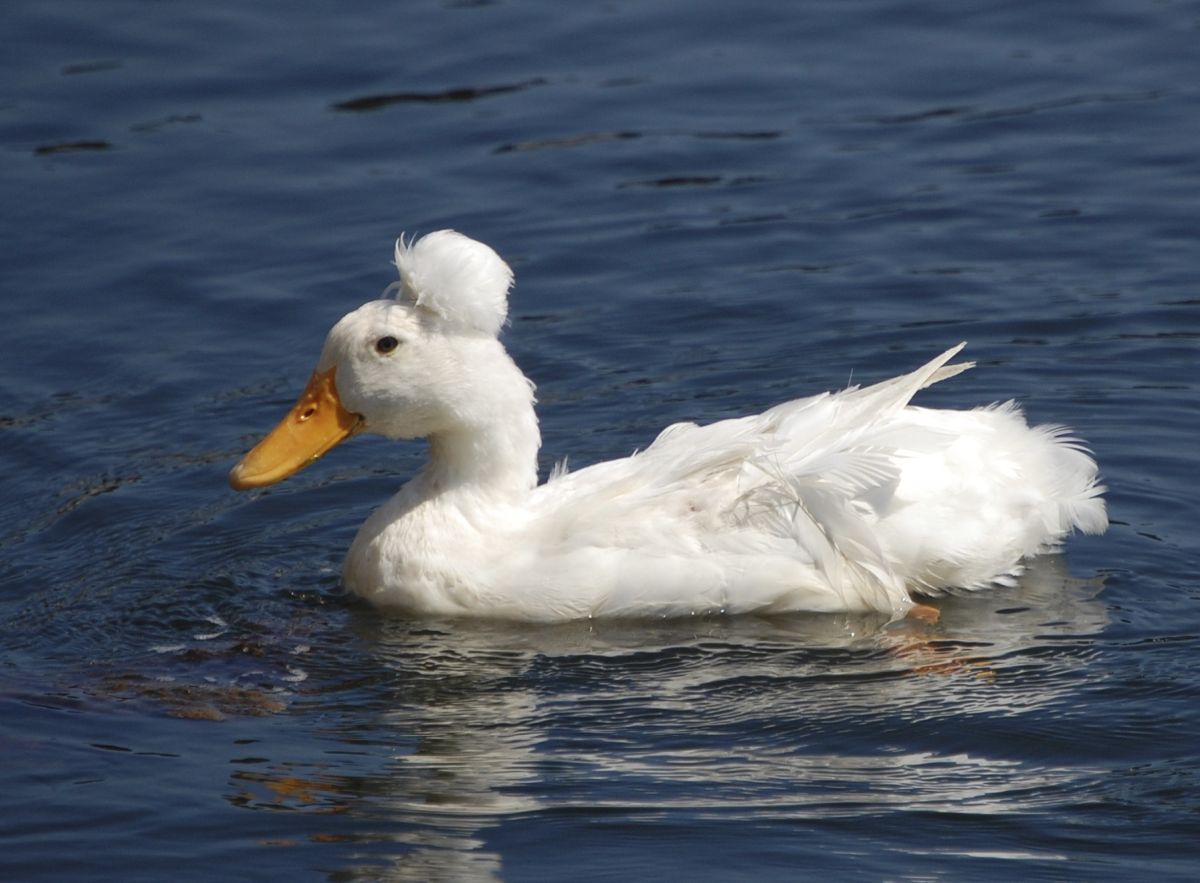 The crested duck breed is one of most unique birds you’ll come across. A crested duck skull is formed differently to caused a large tuft of feathers to stick out on the back of their heads.

These birds aren’t easy to breed, but raising them is manageable for beginners. They can have good egg and meat production, but some people keep them solely for looks.

Before we look at the details of these majestic ducks, here’s an overview of their traits.

The exact history of the crested duck is unclear, but they’ve likely been around since the 1600s. Back in the 17th century, Dutch painters created art resembling this unique duck breed.

The crests are caused by a genetic mutation that’s related to a skull deformity. When this occurs, the duck’s embryo develops a gap in the skull to cause the crest. The gap fills with fatty tissue.

Crested ducks are believed to have originated in the East Indies, and they made their way to Europe shortly after. They became popular livestock for European farmers right away, but it took these birds a while to become recognized as an official breed.

Crested ducks got their name because of the large, afro-like crests on top of their heads. The trait originally appeared in mallard ducks as a mutation, but through selective breeding, it has become a consistent trait for this breed.

The duck crest isn’t the only appeal to these birds’ looks. Here’s what to expect at every life stage.

Crested ducks lay medium to large eggs that are either white or blue. The color of the egg shell can vary based on the appearance of the parents.

If the crested ducks have white feathers, they’re more likely to lay white eggs. If they have blueish feathers, you can expect blue egg shells. Some ducks may lay a combination of the two colors.

Crested ducklings have the fuzzy yellow appearance of most young ducks, but they often have a fuzzy crest on their head just like the adults. Some crested ducklings won’t have crests, and you’ll know if they do or not as soon as they hatch.

The crests are a gene that they have from birth, so if a duckling doesn’t have a crest, one won’t develop over time.

Crested ducks can have white, black, gray, blue, or buff feathers. Almost all crested ducks look like ducks with afros, but some won’t inherit the crest. A white crested duck is the most common.

Like Indian Runner ducks, crested ducks stand will a tall, upright posture. They have light orange beaks and feet.

Male and female ducks look almost identical, but the males have larger crests. Like other duck breeds, males are also more likely to have a curled tail while female tails are straight. Male ducks make raspy sounds while females quack.

Adult males weigh between two and seven pounds while females weight two to six pounds. The ducks on the smaller end are known as miniatures or bantams.

Crested ducks can be friendly, but they’re shy and nervous in new situations. So, while your duck gets used to their enclosure, they may be easily spooked. If you interact with them enough, they’ll be calm and easygoing.

Like most ducks, they love exploring, so they’ll be the happiest if they get time to free-range. They also love to swim, so a pool of water is a great addition.

You can expect to raise fertile eggs yourself because crested ducks rarely go broody. After laying eggs, they won’t incubate them, even if there’s an embryo inside.

These birds are quieter than most duck breeds. They usually only make noise when looking for a mate, so they won’t annoy your neighbors.

Can They Live with Other Birds?

Crested ducks are social, so they like to live in groups. Those groups can be made of other birds of the same kind or other duck breeds. Before choosing ducks to keep with this breed, make sure they have easygoing temperaments and won’t pick on your crested ducks.

These ducks have similar care requirements to other types of ducks, so even beginners can handle them. Even so, it’s good to do lots of research before buying ducks of any kind.

Like other poultry birds, crested ducks need a feed that’s high in protein and calories when they’re ducklings. A special duckling feed will give them the nutrients needed to support their rapid growth rate.

Most duckling starter feeds contain 18 to 29 percent protein, and the young ducks should eat that for about three weeks. Then, you can transition them to adult feed.

Older ducklings and adults still need protein, but not as much since their growth has slowed or stopped. About 14% protein is normal for adult feed. They also need calcium for bone health and zinc for overall function. Vitamins, such as vitamin B12 and niacin, are also essential additions.

There should always be feed and fresh water accessible to your ducks, but they can also get added nutrition by free-ranging. When roaming, they may eat plants, seeds, and small critters to boost their health while also controlling pests on the property. The more space they have to explore, the more nutrients they’ll find.

In the coop, each duck needs at least four to five square feet. If you’re able, feel free to give them more. They don’t need perches because they will sleep on the floor of the coop.

Crested ducks don’t need nesting boxes either. As long as the bedding on the ground is comfortable enough, they will make nests on the coop’s floor. The coop should have proper ventilation to protect them during every season. You should consider using an automatic coop door to keep the ducks safe from predators at night.

The coop should be comfortable for the ducks, but the space outside the coop is just as important. These ducks thrive if they have free range time, but if you don’t feel safe letting them roam free, make sure they have at least 15 square feet per duck in the run.

Most ducks like to have some water to play in during the day. If there’s no pond nearby, you can use a small pool to keep them entertained.

Crested ducks are tolerant of all temperatures, so they can be kept in any climate. While some birds stop laying eggs in the winter, crested ducks usually lay eggs year-round.

Even though these birds are hot and cold hardy, keepers still need to take precautions during extreme temperatures. No matter the temperature, ducks should always have access to fresh water. In the summer, they should have lots of spaces with shade.

If you live somewhere that gets very cold in the winter, you might want to consider getting a coop heater to protect the ducks at night.

Crested ducks are generally healthy birds, but they can still catch common duck diseases, such as duck plague, hepatitis, and avian cholera. Some of these diseases can be vaccinated against.

Your ducks can also become exposed to toxins in their environment. If parasites or dangerous materials wind up in the duck enclosure, ducks could get sick quickly. So, keep the coop clean and replace the food and water regularly.

If you’re ever worried about the health of one of your ducks, separate them from the flock and contact a vet.

Crested ducks have an average egg production in comparison to similar breeds. They can lay anywhere from 120 to 200 eggs per year. Their clutches include 9 to 13 eggs that are considered large for the duck’s size.

These ducks are reliable layers, and they may continue laying even in winter months. Most ducks start laying eggs at five to six months old, and crested ducks will continue laying consistently for several years after they reach sexual maturity. The eggs take about 28 days to hatch.

Since these eggs are large, they have a bigger yolk, making them better for using in baked goods. Keepers claim they’re richer and more nutritious than duck eggs from similar breeds. They’re said to contain almost twice the protein of an average duck egg.

Crested duck eggs also have high amounts of zinc, selenium, and magnesium, which are great for mental health. They’re a great source of omega-3 fatty acids as well. Thus, most keepers prefer these ducks solely for egg production rather than meat production.

Even though chickens lay eggs more consistently than ducks, many keepers prefer ducks because the eggs are larger and are said to have a richer taste. You can also sell duck eggs for more, so if you’re having a hard time deciding, you’ll need to consider all the pros and cons of duck eggs vs. chicken eggs.

Breeding crested ducks isn’t recommended for keepers with no experience. Mating two of this breed requires extra caution because it could create a dangerous gene pattern.

About 25% of crested duck embryos never fully form as a result. If the offspring with those genes develop and hatch, they have a higher risk of health concerns. Some may be born with a twisted neck.

Also, breeding two crested ducks doesn’t guarantee that the ducklings will have crests. So, most breeders choose to breed a duck with a crest with a crestless duck because it lowers the risks for the offspring. Even if one of the parents doesn’t have a crest, many of the ducklings likely will.

Before you think about buying a duck crested breed, here are some commonly asked questions.

Can Other Duck Breeds Be Crested?

Yes, other ducks can have crests, but it’s not as common and won’t look quite as exaggerated as it does on this breed. Some ducks, such as any type of Mallard, may hatch with a crest on their head, but it’s rare.

Yes, crested ducks can fly. In captivity, they don’t fly often, but they will fly briefly to escape danger. It’s rare to see them fly long distances. As long as you give them all their basic needs, they won’t fly away from the coop.

How Long Do Crested Ducks Live?

Crested ducks live 8 to 12 years, which is longer than the average duck lifespan. Of course, their genetics and care play a huge role in how long they live.

Is a Crested Duck Right for You?

Whether you’re looking for eggs, meat, or just something nice to look at, raising crested ducks might be for you. They’re an easy breed to care for as long as you’ve done plenty of research.

These ducks like to be in flocks, so you’ll need to purchase several of them to keep them content, and don’t be afraid to give them more space than they need. Yet, when it comes to breeding, leave it to the professionals.