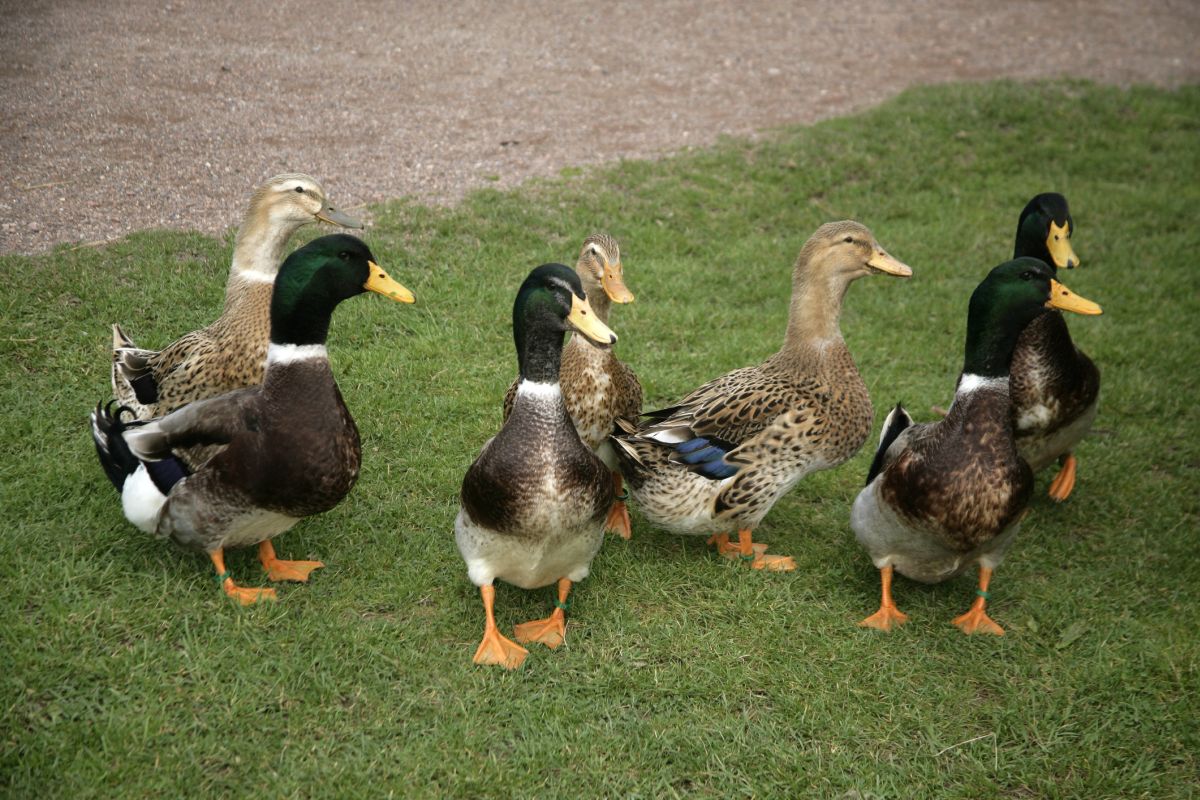 The biggest duck breeds are majestic, but are you ready to own one? They’ll need more space than the average duck, but they often have good egg and meat productions to make up for it.

So, if you have lots of space to provide a flock of ducks with, consider buying some large duck breeds for your property, but remember, every breed has unique needs.

How Big Does a Duck Get Normally?

Like most birds, ducks are very light, even if they’re tall. Most ducks weigh between 1.5 and 4 pounds, so anything 5 pounds or larger is considered a big duck.

Here are eight of the biggest duck breeds that you can raise. If you decide to buy one of these breeds, make sure you provide them with extra space to accommodate their size.

Muscovy ducks are known as the biggest duck breed, but they’re also known for their friendly personalities. They don’t like being handled, but they love spending time near humans and following them around.

It’s common for males to weigh around 15 pounds. These ducks are usually black and/or white, but they’re most easily distinguished by the red, bumpy skin on their faces.

Aylesbury ducks are large because they’re primarily used for meat in the United Kingdom, however, they’re uncommon in North America. The breed got its name because these ducks were originally bred in Aylesbury, England, during the 18th century.

Both males and females of this breed reach 10 pounds regularly. They have a simple appearance with white feathers and a pink-ish beak. If the duck’s legs and beak are orange without a pink tint, they’re not a purebred.

Pekin ducks look like Aylesbury ducks, but they’re white with bright orange beaks. They’re around the same size, and they’re used for meat in many countries. There is a less common “Jumbo” version of the breed that can reach up to 12 pounds.

Keepers also raise these versatile ducks for eggs and companionship. They’re docile pets that enjoy eating bugs and other pests that enter their space. They have stronger immune systems than most duck breeds, and they’re more tolerant of extreme temperatures.

Silver appleyard ducks are better egg-layers than most heavy ducks, producing up to 270 eggs per year. They were first bred in the 1930s and named after their breeder, Reginald Appleyard. They’re meant to be dual-purpose birds that excel in both meat and egg production.

These ducks have beautiful pale feather patterns that consist of brown, white, and black. 9 pounds is a common weight for them. They’re intelligent birds that excel when they get free-range time.

Rouen ducks are often mistaken for Mallards, but they’re at least several pounds larger. Like Mallards, the females are all brown while the males have a green head. Some Rouens may reach 12 pounds, but 8 to 9 is more common.

These ducks are easy-going, quiet birds. They can be used for eggs or pest control, but they’re more commonly used for meat. Yet, they’re slower to mature than most ducks because they aren’t full-grown until they’re about a year old. They originated in Rouen, France, hence the name.

Blue Swedish ducks, also known as Swedish Blue or simply Swedish, were a popular breed in the mid-1800s, but today, people tend to favor Aylesbury and Pekin ducks. They are commonly used for meat, but they can also lay up to 180 eggs per year.

These birds are shier than other big ducks, but their appearance helps them stand out. They have beautiful blue-gray feathers on their bodies with a black head and white belly. Blue Swedish ducks are considered endangered with only about 100 breeding pairs left.

Saxony ducks are a German breed that was first bred in the 1930s. They’re dual-purpose birds, but they only lay an average amount of eggs each year. Some keepers favor them for their appearance above all else. Their only feather colors are gray-blue or chestnut. Patches of white are common too.

These ducks are considered friendly and intelligent, so they can happily coexist with other ducks. They’re good at foraging, and the female ducks will often incubate their own eggs. They’re a fun and beneficial breed to have around.

Cayugas are the smallest duck breed on this list, but they’re still several pounds larger than the average duck. They used to be raised for meat, but now, people keep them just because they’re beautiful. That have black feathers with a tint of green in them that’s especially shiny when the sunlight hits it right.

They’re quiet birds that do well in all types of environments. Their egg color changes as the year goes on. They have dark-colored eggs at the beginning of their laying season, but they’re almost white by the end. These ducks may also develop lighter feathers as they age.

How Much Space Do Large Ducks Need?

Space is the main difference between caring for a large duck and a small one. Large ducks need extra space to spread out and explore.

Most ducks only need about four square feet of floor space, but larger breeds should get closer to 10 to 15 square feet per bird. It might seem excessive, but this is where the ducks will spend their whole lives, so they deserve to have as much room as possible.

Before you decide which duck breed to bring home, here are some questions duck keepers commonly ask.

What was the Size of the Biggest Duck in the World?

There is no official record for the biggest duck ever. The most well-known large duck is Long Boi, who is a mix between a Mallard and Indian Runner. He stands about 3.5 feet tall, but his weight isn’t mentioned.

Are Ducks Easier to Raise Than Chickens?

Yes, most ducks are easier to control than chickens, but each bird has their pros and cons. Chickens tend to be more active but also lay more eggs. Then, ducks lay less but produce bigger eggs. So, there are lots of pros and cons to weigh in.

What is the Average Duck Lifespan?

In the wild, most ducks don’t live longer than 7 years, but in captivity, they can live anywhere from 5 to 15 years, depending on the breed and care provided.

Should You Own One of the Biggest Duck Breeds?

If you have enough time and space to commit to some of these big duck breeds, then bringing some home might be a good choice for you. Just make sure you consider what you want these ducks for: eggs, meat, appearance, or companionship.

Duck eggs are different than chicken eggs. They’re larger, richer, and may have a different taste. So, consider the differences between ducks and chickens before choosing which to raise.