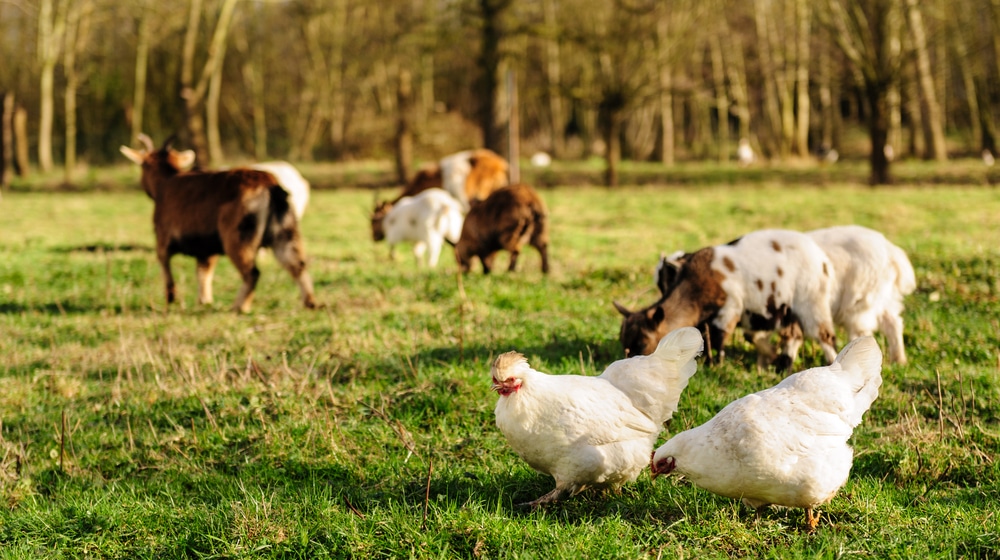 Keeping animals on a homestead is fun and rewarding. Whether you want eggs and meat to sustain your family, or to just want to enjoy their company and disposition, keeping farm animals can be a very joyful experience. If you have chickens and are used to their behaviors, you might be thinking of adding more animals. If you have other animals, you may be thinking about adding chickens to the mix.

How Much Space Do You Have?

The first thing you’ll want to consider is how much space you have to work with. Chickens don’t require a whole lot of room. They are happy in a small backyard area with a house, shelter, and some room to roam around. Chickens are also happy free-roaming in a large field. So, in this case they are very adaptable.

As you consider the pros and cons of each animal, consider how much space they need to thrive without crowding the chickens. You also want to look into the zoning regulations of your neighborhood. Many city areas are perfectly fine with a few chickens, as long as you don’t have a rooster. Some allow small goats. You could perhaps consider ducks, geese, rabbits, dogs, and cats. But any larger animal, or more than a few varieties of animals, are probably pushing the limits.

On the other hand, if you have a large yard, or even several acres, and it’s zoned agricultural, you have many more options. Think about how you are using this land. Can you subdivide it into animal zones, or are you wanting the animals to share the same space? Different animals have special needs, so don’t just bring home cute little ducklings without thinking about a water area. Consider housing and roaming needs for each species.

How Much Time Do You Have?

Depending on how your chicken flock is set up, they might require a little or lot of time and energy on your part. At the very least, you are keeping their coop clean, gathering eggs, feeding them, and making sure they are contained and protected. Research general care of each type of animal and ensure you are ready to take on the commitment needed to provide them a health and safe environment. Even if you just add more birds to the mix, your workload will expand. It’s easy to get excited about new animals, so make sure you add them slow and avoid being overwhelmed.

What Is Your Purpose for Adding Animals?

Chickens are vulnerable to predators. It is a great idea to add animals to guard them from hawks, bears, mountain lions and raccoons. While you might consider a dog to be the most logical choice, other animals might offer better protection.

Other Fowl to Keep With Chickens

The most logical and easiest choice to add to your flock might be more birds. Geese and ducks provide different kinds of eggs. Turkeys and Guinea Fowl are great to raise for meat.

You might think that birds naturally share space well, but that is not always the case. If the birds have good dispositions, you will probably have few issues, but sometimes they can be territorial and get into spats.

If you have room to free-range your chickens, there will be plenty of room for other fowl to roam as well. They will not need to compete for space or snacks. As fowl are social animals, it is a good idea to add birds in pairs. A lone duck in a group of chickens might be shunned or picked on. You will want to keep bird varieties separated during feeding time, especially if you are raising birds for their meat. They each have different dietary needs.

If you have a flock of only birds, you will need to be concerned with predators. Birds are vulnerable, even in large groups. If you don’t have larger animals, you will want to build high fences with protection from tunneling creatures as well as protection from the sky, and perhaps limit their free-ranging.

Let’s explore several varieties fowl and how they co-exist with chickens.

Chickens and ducks get along well. Ducks eat some bugs that chickens won’t, so there will be less competition in that area. Ducks do need a pond or pool to splash around in. You should take care that chickens don’t wander into this water and accidently drown. As mentioned, they should be fed separately, as their food has a different nutritional content. Chickens and ducks tend to spread diseases among each other as well, so separate, clean housing is highly recommended. Keep baby ducks protected until they get older as the chickens will chase after them.

Chickens and geese get along in the fields where there is plenty of room. Geese tend to be territorial and may chase chickens away from their favorite spots. Geese like water as well, so the same precautions apply as for ducks in keeping the chickens safe from drowning. It’s best to give the geese a separate housing and sleeping area as well.

Like other fowl, turkeys and chickens can roam in the yard together. Make sure you have plenty of room as turkeys need space. Turkeys are large so they won’t have a problem fending off curious chickens. It’s best to house and feed the turkeys in a separate area to make sure they get the nutrition needed from specific food. This is especially important if you intend to raise turkeys for meat.

Domestic Animals to Keep With Chickens

You might be curious as to how your household pets get along with chickens. Well, it depends.

You might think cats and birds would be the worst combination, but this is often a false assumption. If fact, cats can be a great asset, especially in the housing areas. Mice and other rodents carry diseases that may harm your chickens, and they leave droppings that get into the chicken’s food. They may even bite the chickens and harm them. Cats can keep this population in check.

Dogs should be watched carefully with chickens. How they react depends on the breed and how well they are trained. Some dogs are predatory and will attack and play with chickens thinking they are toys. I’ve known dogs to dig into the chicken coop and kill entire flocks. On the other hand, some dogs will get along fine with chickens and ignore them, and some might offer a level of protection. Do your research and find out if your dog might have tendencies one way or another.

Chickens have a curiosity for smaller creatures as well. Be careful keeping guinea pigs, or other pets near chickens. They’ve been known to chase and peck those smaller than themselves.

Rabbits can be domestic or raised for meat. Either way, chickens and rabbits tend to get along remarkably well. Protect the little bunnies as the chickens may peck and harm them, but in general chickens will enjoy chasing the rabbits around as it keeps them from becoming bored.

Larger Animals That You Can Keep With Chickens

Here are a few larger species that do well with chickens:

Chickens, sheep, and goats can roam together in the pasture with little problem. They keep each other company and the goats and sheep act as protection against some predators. Hunters from the air, such as hawks and owls, will be deterred from diving into the field where goats are. Smaller ground predators will hesitate to approach a field of goats or sheep as well, especially if the animals wear bells.

Chickens help the goats and sheep as well by eating the bothersome bugs. While it doesn’t happen much, there is a possibility the goats or sheep might accidently step on a chicken. Chicken are quick though and should be safe.

Chickens should not be allowed in the goat’s shelter. Goats really don’t like chicken poop in their sleeping areas and have been known to cause a fit. Plus, chicken poop can make the goats sick. As long as you have room for everyone to roam, and feed and house them separately, they have a great relationship.

Chickens don’t mind running around in fields where horses, donkeys, and cows are kept. In fact, this is a beneficial relationship as the large animals keep predators away, and the chickens thoroughly enjoy eating the pesky bugs and maggots in the cow manure and horse dung. Feed and seeds that are in the horse or cow feed are sometimes not digested by the animal and deposited in the manure as well. The chickens will find and eat these tasty treats. They even help spread the waste which helps the soil. Chickens are pretty good about not getting under hoof, but it is a possibility the larger animal could accidently step on a chicken.

Animals That You Should NEVER Keep With Chickens

There are certain animals that should be kept away from chickens because they are known to cause harm. We’ve already talked about some varieties of dogs.

Pigs and chickens do not often get along. Pigs are carnivores and will have your chickens for dinner. That being said, if you take the chance and put these two animals together, the chickens will love the fact that the pigs turn up a lot of dirt and expose lots of bugs and roots.

With more and more people homesteading and looking for sustainable methods of food, chickens are a great place to start. Once you have a flock of chickens established, you can consider adding another animal or two. Think about your space and housing availability and consider which one works for you.

When introducing any animal to the other, pay close attention to their reactions and behaviors and at the first sign of trouble, have a backup plan to separate the species. Many farms enjoy animals that co-mingle and range together creating a symbiotic relationship.